My Instagram Top 9 photos of the year. I love that they represent the important areas of my life: family, friends, flying. learning and yoga.

This was an unexpectedly challenging year. I don’t feel like I was able to fully live up to the lofty vision I had crafted at the end of last year, but I’m okay with that. I had to spend more energy and time than I had planned managing some family and work issues. Life happens.

I do feel like I was able to accomplish more than I would have, had I not written a vision statement; so, I’ll continue doing them for self-inspiration and accountability.

I’m using the same color-code system to rate how well I was able to deliver on my vision for the year, where green = did it, yellow = did some of it and red = didn’t happen.

I thought I’d try something new this year and not wait an entire 365 days to report on my vision statement progress.

I’m at my art studio, waiting for the wax to heat up to a molten state so I can start painting; seems like a good time to write a little. I miss writing. I had a call today with my writing partner about some tweaks to our screenplay and I felt that pull to sit in front of a laptop and empty my brain into another story. I love writing. I need to do more.

So, how are things going so far? What happened in January – March?

I have been focusing on yoga teacher training, so I haven’t been as productive in the studio as I would like; however, with the sun setting later every day, I’m hoping to paint more. Here’s a painting that’s almost done, and one that is just beginning:

Writing a vision statement feels like building the scaffolding for my life this year. It’s the framework of a house that I can decorate over 12 months with experiences and relationships.

However, sometimes it feels a bit grandiose. There are plenty of things I want to happen in my life that I’m not going to document in a vision statement because I enjoy being spontaneous and enjoying serendipitous moments (see: name of this blog).

I’m not as anal-retentive as this process suggests, but I know that the best way for me to get the most out of my one sweet life is to set my intentions and find ways to make them happen. I am a woman of action.

I lost another friend from college this year – a painful reminder that we don’t know how much time we have left on earth. I want to be deliberate in how I live my life. I want to live it to the fullest with the people I love.

Last year’s vision statement was pretty ambitious, and I ended up completing 8 out of the 20 goals, halfway completing 6 and not getting anywhere on 6. This year, I decided to simplify to two main goals per category and a few optional, bonus goals.

Here’s what I hope to accomplish in 2019 and what I’ll be writing at the end of the year:

Here’s what I’ll be writing at the end of this year.  I added my work goals this time because it’s also an important part of my life.

I was able to get Quip to cooperate and found my 2017 Vision Statement. I had written it as an essay but found it easier to evaluate in spreadsheet form, so here’s how it went. I used color-coding to indicate whether or not I felt I met the goal, kinda met it, or missed:

Tomorrow I’ll share my 2018 Vision Statement. There are lots of similarities – things I really wanted to get to this year but didn’t have time or other priorities occurred. And there are some new things! I’ll try to trim the list to something more manageable. Looking back, there was a lot here, and I didn’t even include my work goals.

I’ve been practicing yoga regularly for six years. My first yoga class was in grad school, 15 years ago. I had held the typical military sterotype of yoga that it was too “soft and squishy” of a workout, and I thought I’d be chanting instead of working up a sweat (which is my qualification of a good workout). But a friend of mine convinced me to go to a yoga class he had taken and he promised it would be a great workout.

He was right; it was an ashtanga class. For the unfamiliar, ashtanga is hindi for “ass kicking.” Just kidding, but I loved that it was a serious workout. I wasn’t intimidated by the super yogis in the class who could bend themselves in ways I didn’t think possible. Instead, I focused on what I could do that day. I began going to the ashtanga class fairly regularly, as many times as I could on my grad student budget.I loved the muscles I was starting to feel on my shoulders and abs.

Then I moved to California, got pregnant, and stopped practicing yoga. The demands of raising two small children, running a house and managing full-time jobs in tech took up all of my time and fitness fell to the side.

Fast forward eight years to 2010. I was super stressed out at work and my marriage was falling apart. I needed to do something, anything to find some inner peace. I remembered a few co-workers from a previous job who were really into bikram yoga and had recommended it. “Bikram” is hindi for “hot and smelly feet.” Just kidding, but it is conducted in a heated room, which, if not cleaned properly, can get pretty darn stinky. It’s a series of 26 poses, each done twice, first for a minute and then for 30 seconds. The whole series takes 90 minutes, and by the end, you are drenched in sweat and feeling pretty wiped. My kind of workout.

Over the past six years, I’ve improved my flexibility and strength. I progressed to power yoga, which involves inversions and balances – a new challenge for me. One pose in particular had been my nemesis for a long time: bakasana, or crow pose. It’s a balance on ones’ arms, using arm and core strength. I could put my knees on the backs of my upper arms, lean forward and lift one foot off the ground, but I was afraid to lift the other foot because I was sure I would fall forward on my face.

I spent months in class balancing on one toe, so afraid to let that toe leave the ground. See, I’ve never been able to do a pull up. I’ve never had great upper-body strength, so I kept telling myself that I shouldn’t be able to do anything that requires it. But bakasana requires not just physical strength, but mental power.

I finally got tired of not trying and one day, decided to lift up that toe. I balanced for two seconds and then my toes came back down. It was super short, but it was air time and I held the balance for those two seconds.  I was elated; in all those years I’d always leave that one big toe on the floor to balance and support myself. I’d never trusted myself enough to do the full pose. I’d always think, “What if I fall on my face?” and finally I thought, “What if I DON’T fall? What if I can rock this pose and I’ve been wasting all this time doubting myself?” So I did it.

The lesson for me? I’m stronger than I realize. And who cares if I fall? I will keep trying, and get stronger, and balance longer.

Yes, sometimes I wipe out: 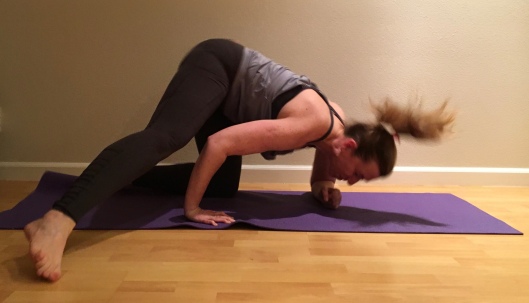 but I just don’t GAF about that anymore. Because I’ll get back up and try again. I know I can do it now.